If you have been following my blog for a while, you know that I really like Topo Athletic shoes.  They offer shoes with a low heel drop and wide toe box.  This allows your toes to spread out instead of feeling claustrophobic like in most shoes.  The durability of the materials that they use is excellent as well.  The MT is one of the first pair of shoes that I reviewed on my blog.  It is still one of my favorite trail shoes because it is so light, comfortable, and really flexes with your foot.  The Hydroventure is an amazing trail shoe with a waterproof eVent material that keeps the water out but is still breathable.  Topo Athletic also has some amazing road shoes.  My favorite road shoe from Topo Athletic is the UltraFly because its lightweight, responsive, and has plenty of cushion.

Topo Athletic took the Magnifly and made some changes to get back to their roots.  Topo Athletic has been known for their zero drop shoes (with only a few exceptions in their lineup that had a low heel drop between 3-5mm).  The original Magnifly  had a 5mm heel drop and weighed in at 8.8 ounces.  The Mangifly 2 has a 0mm heel drop and weighs in slightly heavier at 10 ounces which actually surprises me since it looks like they have streamlined the second iteration of the shoe.  My guess is that the extra weight is in the midsole material.  While 10 ounces isn’t too heavy, I was curious why they added weight to the shoe since most of Topo ’s shoes tend to me on the more minimal side in both weight and cushion. 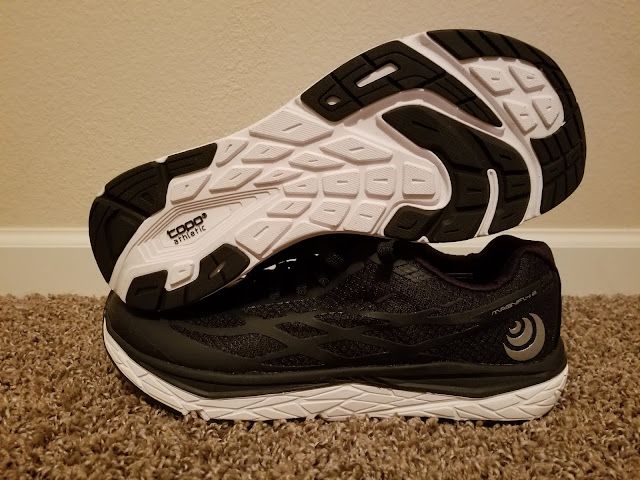 First of all, if you are not familiar with Topo Athletic shoes, they fit snug in the heel and midfoot, while it they are looser in the toe box.  The wide toe box allows your toes to spread out, which has several benefits.  This will not only help you be more stable, but will also reduce foot injuries commonly caused by shoes that compress your toes.  They also typically have a low heel drop (most at zero drop) which promotes a more natural gait with less heel striking, generally speaking, and puts your body in a better alignment. 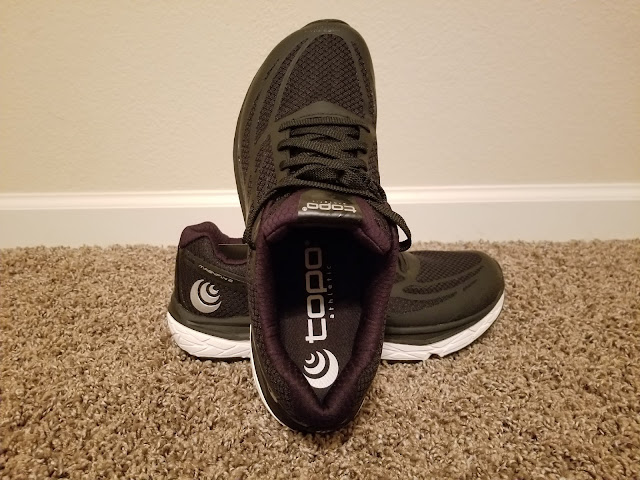 The Mangifly 2 provides a responsive ride that is not only good for speed or track workouts, but is a great everyday trainer.  They would even be good on race day for shorter distances up to maybe a half-marathon (it might be suitable for longer races depending on your personal preferences though).  I have been using shoes with more cushion lately because of some Plantar Fasciitis issues, but the amount of cushion on the Mangifly 2 was just fine for me. 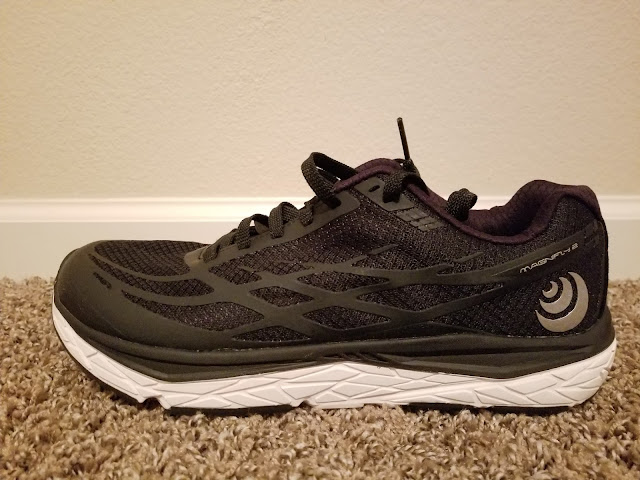 Topo Athletic uses a Multi-Density Midsole material with two separate levels of cushioning.  There’s a softer level near your feet and a firmer more responsive level near the outsole (ground).  I felt like I was getting the responsiveness that I crave and the cushioning that made my feet happy.  That’s not to say that there’s a ton of cushion… it definitely isn’t a Hoka oversized sole, but it’s decent. 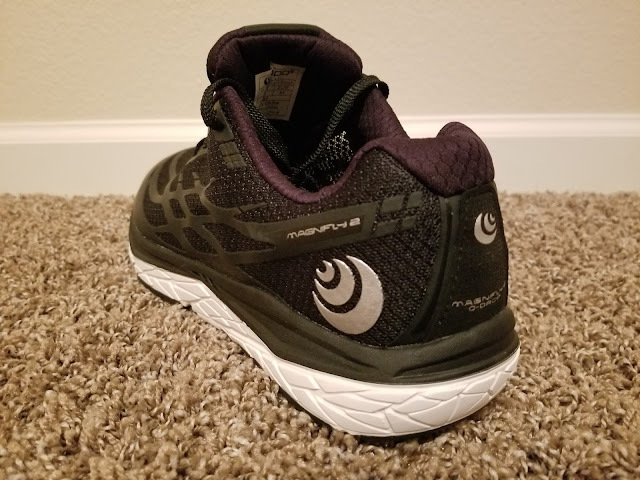 The Mangifly 2 comes in three men’s colors (Black/Black, Bright Green/Black, and Slate/Black) and three different women’s colors (Grey/Peach, Ice/Raspberry, and Navy/Pink).  The shoes really feel great from the moment you take them out of the box and give you enough cushion to really push, while still remaining relatively light.  I can’t get enough of shoes with the wider toe box.  Most of my foot pain (due to foot compression of narrow shoes) has disappeared since switching over to wider toe boxes.  I really like the Mangifly 2 for the simplicity and feel you get with them.  They are not overbuilt, but provide you with a great feeling throughout your gait cycle.  You really can’t beat the value either as they only cost $110 on the Topo Athletic website.

As I have been saying with almost every review, Topo Athletic continually ups its game with each release of a new shoe.  The Mangifly 2 takes a great shoe and made it even better in most areas.  It feels light, even though they increased the weight of the shoe.  If you haven’t given Topo shoes a shot, you really should.  Everyone has different shoes that work for them, but Topo puts out some really great products.  You can get a pair at the Topo Athletic website, or check the Topo Athletic Store Locator for a store near you.  Give them a try today and let me know what you think.