Have you heard of Altra?


Altra was founded by Golden Harper who at age 12 ran a world’s record 2:45 marathon (for his age), a record that still stands to this day.  He started working at his family’s running store in the 90’s.  Golden made his first “modified zero drop” shoe in his toaster oven and the rest is history.  Here is a video where he describes the birth of Altra.

This is the first post during my week of Altra.  I love Altra so much that I want to help introduce other runners to them.  I have seen benefits and have become less injury prone since I switched to primarily zero drop shoes.

I went to a Run Better Clinic that Golden Harper put on at the Fleet Feet in Sacramento in J Street.  It was a great class about Altra’s history, why running in zero drop shoes and a FootShape™ toe box can help your running, how to improve your form, and interesting facts about running.  I will share some of that with you today.

Golden went over some running techniques that can be found at www.AltraRunBetter.com
1) Proud, Forward Momentum Posture: Hips & Chest are pushed forward without bending at the waist.
2) Compact Arms: Elbows shouldn’t swing forward past the hips unless sprinting—this will keep the body in proper position and prevent over-striding.
3) Soft Landing Under a Bent Knee: Don’t think about foot-strike, as it will take care of itself if the other points are done correctly. Most people will naturally land somewhere between a slight heel strike and the middle of the foot.  Excessive heel striking or forefoot/toe striking is discouraged.
4) High Cadence: Nearly all elites have been observed to have around 180+ steps per minute.  For most people, ultimately shooting for at least 170 steps per minute will drastically improve form, improve foot-strike, and reduce impact. (1)
We also covered several interesting facts about injuries, elevated heels in running shoes, over-striding in runners, does cushioning decrease injuries, and how to become a stronger runner.

“Most running injuries are due to muscle imbalances.  Despite being softer, tracks & treadmills cause more running injures than the road due to every step being the same.  To avoid injury, shoot for 1/3 of your mileage on dirt, grass, cobblestones, or other uneven surfaces.  That will strengthen your intrinsic muscles & keep your muscle structure balanced.” (1)

“Despite all the advances in technology, running injuries have not gone down since modern running shoes were created--- some have even gone up.” (1)

“While cushioning can benefit the feet, running shoe cushioning has never been shown to reduce impact on the joints.  In fact, studies have shown that more cushioning causes the body to impact the ground harder to find stability.  The more the cushioning, the harder the body instinctively hits the ground.” (1)
“The Running Injury Clinic followed 10,000 runners for 15 years and found out that only 13% of runners benefited from wearing a stability shoe.  The majority of the population was least injured & best served by wearing a shoe that “does not interfere with the natural mechanics of the foot.” In fact, “over-pronators” are less injured than other runners.” (1)

“Over 200 studies have been done on “over-pronators” of the foot & injuries---no significant link has ever been found.  Ironically, shoes built to reduce over-pronation have been shown not to work.  Studies show that stability shoes make it appear that the pronation is not happening, but the foot continues to pronate the exact same amount inside the shoe.” (1)

Golden talked with an engineer about the myth of asphalt being softer than pavement.  The engineer said that the difference in hardness was so insignificant that it wouldn’t reduce the amount of impact, which is why Golden suggests running 1/3 of your miles on uneven surfaces or trail running.

I started running in Altra shoes about three years ago.  My first pair were the Instinct 2’s.  I instantly fell in love with them.  The foot shaped toe box, zero drop design, light weight, and plenty of cushioning kept the Instinct 2 as one of my favorite shoes for quite a while (and they are still one of my all-time favorite shoes).  I have written reviews for several Altra shoes in the past.  Click the links to read my past reviews:
Instinct 2
Paradigm
Instinct 3
Lone Peak 2.5
The One 2.5

I have also written a few articles about the FootShape™ toe box and zero heel drop.  There are a few guest blog posts with Golden Harper as well.  Here are the links to those.
Why I run in clown shoes, and you should too.
My Healthy Running Philosophy: How to be a Better, Injury Free Runner by Golden Harper
Q&A with Golden Harper (Founder of Altra) 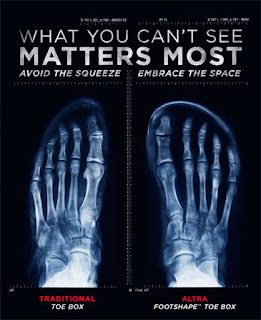 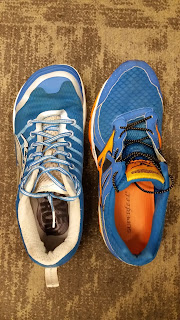 Posted by Brian Goldman at 6:00 AM