* I received a free entry to for the SoFi Golden Gate Half Marathon as part of being a BibRave Pro.  Learn more about becoming a BibRave Pro (ambassador), and check out BibRave.com to review, find, and write race reviews!

So you may have seen that I am a brand ambassador for the 2016 SoFi Golden Gate Half Marathon in San Francisco that was on November 6, 2016.  It was one of my bucket list races and I got to check it off the list.  The race used to be called the US Half Marathon.  The idea of running across the Golden Gate Bridge and the awesome scenery were the main reasons why I was so drawn to this race.  The temperature in San Francisco this time of year is fairly dependable and is perfect for racing.

There were tons of emails that said where to park, what to bring with you, packet pickup/expo information and more.  There were 4 emails the week of the event along. There was a lot of great information.  I opted to pay $25 for race day packet pickup. 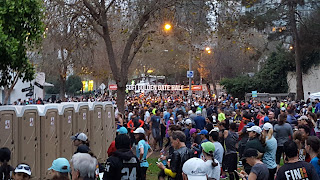 I got up at 2:30 to drive from Sacramento to San Francisco and get there by 5:30.  I parked near Fort Mason in the Yacht Club parking area.  None of the people who parked there knew if we were allowed to park there or where to go from there to get to the start.  There could have been better signage and a better list of where to park and how much it would cost.  There should have been some signs in Fort Mason that pointed people in the right direction since you needed to walk up some stairs and through a park to the starting line from the parking area that I was in.

The start was rather packed and it took several miles before it was easy to pass people.  They could have organized the start a little better by either pace or in waves to reduce the congestion at the start.  There were quite a few of walkers up front that you had to make your way around.

You start the race at the Muni Pier in Aquatic Park.  You could get some great pre-race pictures with the Alcatraz and Ghirardelli in the background. Here is a breakdown of the course.

The race starts out by taking you immediately up a short hill and around to the marina and Presidio on your way to the Golden Gate Bridge.  The course is fairly flat for the first 3 miles until you start your hill climbs. 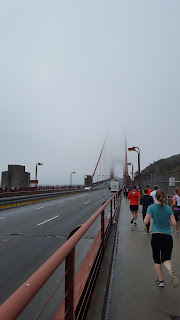 The first hill is about 0.3 miles long with about a 60 foot elevation gain.  Followed by an equivalent downhill section.  Then you start your biggest climb, about 250 feet of elevation gain over 1.5 miles.  The next mile (from roughly mile 5-6) is primarily downhill and takes you to the Golden Gate Visitor Center where you get on the bridge.

You run along the Eastern sidewalk of the Golden Gate Bridge for the next mile. Where you head up to the vista point, which is a great location to take a quick selfie or bridge pic.  The course then takes you on a gravel downhill section that winds under the freeway and up a small hill to the Western side of the freeway. Runners will run along the Western sidewalk of the Golden Gate Bridge until they get off the bridge. 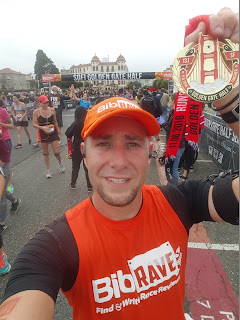 The sidewalk on the Golden Gate Bridge was wide enough for 3-4 people to run side by side, but most of the time they were running 3 across and it was difficult to pass.  You just had to plan your passing when there were opportunities.

After you cross the Golden Gate Bridge, you come to your final hill.  A 100 foot elevation gain over 0.15 miles.  You are rewarded by a 0.75 mile downhill stretch where you lose 150 feet of elevation.  This is where you can make up some time.  You follow the bay to Fort Point where which is the end of a short out and back.  The last two miles consist of rough paved roads and running on hard packed sand as you pass Chrissy Field and finish at Yacht Harbor.

There is a total of 1,215 feet of elevation gain according to my Garmin.  I felt that the most difficult part were the hills were between miles 3 and 5.  Let me also say that my Garmin showed the race as being 13.2 miles, which can be explained by me not running tangents (cutting the turns closely).  This is the most accurate race in terms of being close to 13.1 miles.  Usually I find that races measure a little short or long.  Great job in that aspect. 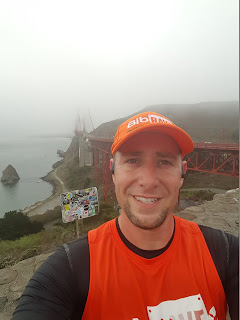 There were plenty of aid stations and they were well placed throughout the course.  Each aid station had water in one area and Vitalyte on the other side.  The Golden Gate Half Marathon had more photographers than at any race I have ever been to (which I thought was awesome).  For most of the course, they had one street lane blocked off for runners and a wide pedestrian sidewalk.

Click here to see an awesome video of this years race.

There were pacers, but I am not sure how many.  The one I saw only had a little white sign and it would have been hard to spot on the course.  I feel that they could have done a better job in this respect.  My recommendation would be to have more pacers and signs that are easier to see (neon colors).

The weather was in the mid 50’s to low 60’s and it was foggy.  One of the key draws for me were the views, which you couldn’t see because of the fog.  Not the races fault by any means.  The temperature was great though and other than a fine mist, there was no precipitation, which is what was forecasted.

The expo was held the day before the race (Saturday, November 5th) from 10:00 AM-6:00 PM.   You had to attend the expo to pick up your race bib and event tee unless you wanted to pay for one of the options that allowed you to either get the bib and timing chip mailed to you or wanted to pick up the bib on race day (both options have an additional fee associated with them). 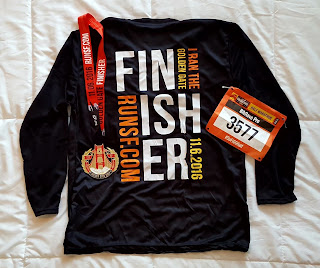 You get a long sleeve tech tee when you picked up your race bib.  The quality seems decent, but not exceptional.  The design is nice and clean.  I love the idea of giving away a long sleeved shirt since I have plenty of short sleeve shirts but only a few long sleeve race shirts.

As you cross the finish line, you get your medal and a water bottle.  The medal is larger and heavier than any medal that I have received to date.  It is at least 4” in diameter, maybe more, and looks great.

There was a virtual Swag bag that included discounts from various races like the Surf City Marathon & Half, 30% off the HipZipp, and 20% off goodies from the Divas Half and 5K.  They also had discounts off Injinji, Brandinc, Pro Compression, and Uber plus a few others.  Really, there wasn’t anything that I would use. 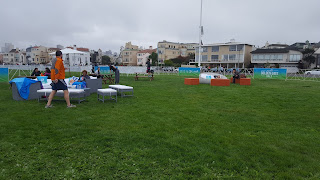 They did have food and goodies after the race.  They had bananas, Kind Bars, Kettle Chips, and a few other samples.

Sierra Nevada was on hand for those people 21 and older.  There were a few food trucks, one of which had some huge doughnuts for sale that looked amazing.

Muscle Milk had an area with Yoga mats and Trigger Point Rollers for people to stretch and roll after the race.  You could also pick up a free bottle of Muscle Mile, which was awesome. 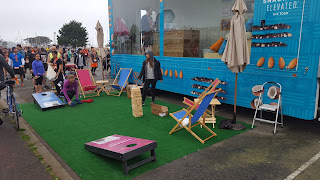 They also had a Sofi relaxation zone with round couches that had plenty of pillows.  There were a few people taking naps.  There were some picnic tables and nice padded benches to sit on.

Bark Thins was also on hand and was giving away samples as well as an area to play Corn hole and Backyard Jenga.

There was a large white tent that had tons of race booths, specialty health drinks and snacks to sample, clothing you could purchase, and the gear check.

They did have a gear check at the beginning of the race and you could get your stuff after the race in the big tent where they had the vendors.  There weren’t any signs stating where you could pick up your gear and it was extremely unorganized.  There were no lines and really no order of where they placed the bags from what I could tell.  Just big piles of backpacks.

Why I would recommend the SoFi Golden Gate Half Marathon

This was my first race that I traveled outside of the Sacramento area for so keep that in mind.  I thought the information provided by the event via email and directions were well put together for the most part.

I was impressed by the course, aid stations, and amount of photographers on hand.  There were a few things that could be improved upon including better pacing, parking directions, and where to pick up your gear.  I really liked this race and would recommend it in the future.  Any large event will have areas where they can improve and even thought I mentioned some negative things, you should know that the event was well put together and I hope to race it again in the future.  Please let me know if you have any specific questions and I will be more than happy to answer them.
Posted by Brian Goldman at 6:00 AM