I have been cycling for over 15 years.  I am not a novice, but am far from a professional rider.  I am always looking for ways to improve my performance outside of my normal training to get stronger and faster.  I came across an advertisement for Osymetric chainrings and was very intrigued.  They are not round like the chainrings on most bikes.  Why would you want an chainring that isn’t round though? 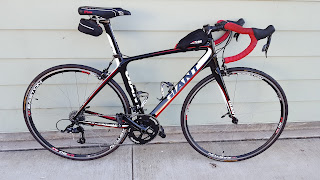 Let’s first start with what I used before and what I am testing.  I have a 2012 Giant Defy 2 Comp.  It came with a compact setup with 50-34 chainrings up front and an 11-32 cassette in the back.  I mostly ride in the flat Central Valley of California now, so I changed my rear cassette to a 12-26 for cleaner shifting and less of a gap between my gears (I was having a hard time keeping up during sprints with my friends because of the gaps between my gears).  Osymetric sent me the 52 tooth large, 38 tooth inner ring, as well as an assembly kit.

What are Osymetric rings though?  They are chain rings that are not round like traditional chainrings.  They are not oval or elliptical either, but have a twin cam shaped design.  The patented design from Osymetric USA reduces the gear and effort needed to get through what they call the “dead spot” in your pedal stroke.  It is designed to take advantage of the strongest part of your pedal stroke, between 1 and 5 o’clock where you are pushing your pedal down.

Some of the claims from Osymetric USA are that their chainrings can reduce your lactic acid buildup by 10% and increase your power by 10% regardless of how experienced you are with riding.  One unique aspect of the rings as that the closer you are to your anabolic threshold, the more beneficial the Osymetric rings are.

If you are curious about detailed data analysis of round versus Osymetric rings, here are a few links.

Jean-Louis Talo is a mechanical engineer from Menton, France who produced the prototype Osymetric ring and has spent over 20 years trying to convince the cycling world that it works.
“You can alter the design so that you give the leg muscles work to do where they are at their strongest and less work to do where they are weak. A round chainring gives you work to do where you are weak and takes power away from you where your legs are strongest,” says Talo. “A bicycle chainring is round because at one time that’s all factories knew how to produce.” (1)

There are people who also think that the gains aren’t that great. Tim Kerrison, the performance director at Team Sky who oversees the training of the team said, “I’d say that, performance-wise, there is very little in it either way… A few riders have a preference for the Osymetric rings, but many of our riders have tried them. Only a few continue to use them.”  He also said, “…both Wiggins and Froome used them in the 2012 Tour, so they are unlikely to be significantly detrimental to performance.” (1)

You will need the large (starting at $129.99) and small (starting at $129.99) Osymetric chainrings as well as an assembly kit (which costs $24.99).  The assembly kit is a bolt on chain deflector.  The purpose is to make sure that the chain does not overjump the small ring when downshifting.  There are a variety of small and large chainrings designed for standard, compact, and off road bikes and various group brands (i.e. SRAM, Shimano, etc). 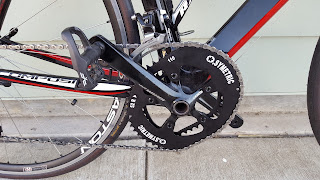 I have tested the Osymetric chainrings for over a month and a half now.  What I can say is that you won’t notice a night and day difference, or at least I didn’t.  What I did notice though was I did have more power and was able to maintain a faster speed on a regular basis.  I was also able to ride longer than with my traditional compact chainrings before my legs started to fatigue.  I not only felt the benefit in the flats where I do a majority of my training, but I found the most benefit on some fairly steep hills.  I was riding up some 10-12% grade hills that I wouldn’t have been able to make it up with my other chainrings.  I even was able to save a few gears in back in case my legs started to fatigue, but they held out.  I was utterly surprised.  I have asked a few friends about their experiences with Osymetric rings and they said that it made a difference in their races.  They are true believers just like I am.

The only negative thing that I have found is that it can be easier to drop your chain than with a standard oval ring.  While I found that to be true, I only dropped my chain twice and it was due to bad shift timing on both occasions.  For me it is not a big deal and wouldn’t deter me from highly recommending the Osymetric chainrings.

Pros:
Multiple options for different crank arms
Standard, compact, and off-road versions
Increases power by 7-10%
Reduce fatigue by 10%
Is used by top pro’s during races (it must be good)
Great Price (my kit would cost under $300 total)

Conclusion
If you are looking on making improvements to your bike that will yield more power and faster riding, Osymetric chainrings are a great option to look into.  They are used by some of the top cyclist in the world and they wouldn’t risk their career on technology that wasn’t scientifically backed.  Not only are they using Osymetric rings, but they are winning with them.  I was a little skeptical at first, but once I tested them for a few rides, I was a believer.  The increased power and reduced fatigue is well worth the price in my opinion.  The small and large rings start at $129.99 each but Osymetric USA is currently having a great sale where you can get each ring for under $100.  Get them before the sale is over.  You can buy yours at the Osymetric USA website.

Note:  I received this product in exchange for a review.  The review is my personal opinion of the product and I was not required to give a particular opinion of it.  I am not a doctor, so please use all of the products that I review at your own risk.

References:
(1)   http://www.cyclingweekly.co.uk/news/product-news/osymetric-chainrings-do-they-work-28044
Posted by Brian Goldman at 6:00 AM