* Disclaimer: I received a pair of Ampla Fly shoes to review as part of being a BibRave Pro. Learn more about becoming a BibRave Pro (Ambassador), and check out BibRave.com to review, find, and write race reviews

I am always interested in new technologies in running.  I read about the Ampla Fly in an article from Competitor.com “The Ampla Fly – The World’s Most Innovative Running Shoe – Is Back on Track.”   This is truly a shoe that will stretch your current ideas of what a running shoe could do for you. 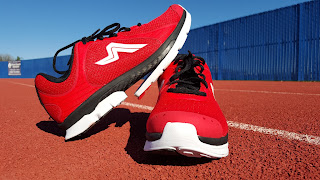 Rob Colby is one of two former Quiksilver Inc. executives who acquired the assets of Ampla out of Quiksilver bankruptcy proceedings in October of 2015.  The small start-up company got off the ground a few years back as a Brand X innovation project (under the banner of Quiksilver), but it wasn’t highly publicized.  Dr.  Marcus Elliott, a noted sports scientist, developed prototypes of the Ampla Fly, which has a unique carbon-fiber platform.  It looks really weird, but is made to compress when you land and give you a little boost when you push off.

Dr. Elliott is a Harvard-trained physician who specializes in performance enhancement and injury prevention of pro athletes at P3 Applied Sports Science in Santa Barbara, California.  The Ampla Fly was designed to guide your foot to a better ground contact position, gather force during your foot’s contact with the ground, and give you a return of energy during the toe-off phase of your running gait. The claim is that the Ampla Fly can help improve running mechanics, cadence, and posture.

Ampla is a direct-to-consumer only brand.  That means that you won’t find Ampla’s in your local running store or at other online retailers.  You can only get them from Ampla (either online or at expos).  What does that mean for you though?  When companies sell their shoes in stores, they have to pay for shipping and other overhead costs.  By selling directly to their customers, Ampla takes a shoe that would cost $180 in the stores and can offer it to you for $120.

They have a 1-on-1 relationship with each of their customers.  If you have a question and email Ampla, it will be answered by Rob Colby (co-owner) himself.  The brand only has 6 people working for them, which also keeps the cost down and provides a more personal experience.

What makes this shoe different from all others?
The Ampla Fly looks completely different than any shoe that I have seen.  It almost looks like something out of a futuristic movie.  Most shoes have somewhat flexible soles.  They bend and flex throughout your gait cycle.  The Fly does not flex due to the fact that it has a carbon fiber force (flip) plate that is supposed to guide your foot into a better ground contact position.  I thought this lack of flex would be an issue because I am used to very flexible shoes.  It wasn’t an issue at all.  In fact, I feel that the force plate does exactly what it was designed to do, teach me how to run more efficiently, but more on that later.  A word of caution though.  If you already have Plantar Fasciitis, the stiff carbon fiber force plate might aggravate your condition, from what I have heard.  I have not had any issues with this personally though. 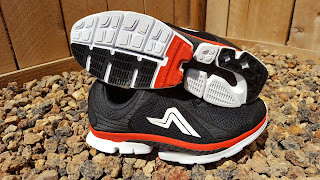 I also wasn’t sure what to expect from the springboard part of the shoe.  It looks like it would feel weird or that you would notice a huge spring with each step.  While it did feel kind of different walking in the shoe, once I started running, it just felt natural.  It does feel somewhat clunky if you are a heavy heel striker, but that’s the point.  The shoe itself, teaches you to land more mid to forefoot with just a little forward propulsion.

The bottom of the shoe does show wear rather quickly, but I found that it did not make a difference with performance and even after 6 months of testing these shoes (between my friend and I) the shoes are still holding up.

The top of the Ampla Flys is breathable and the way your foot sits in the shoe feels great.  The overall construction of the shoe is awesome and that the materials are top notch.  I did notice that my heel did slip up and down in the shoe, especially when I was breaking in the shoe.  After I wore in the heel, it got better and I used the lace-lock method of tying my shoes to help fix this issue as well.

Where to use and not use the Ampla Fly
The Ampla Fly was designed to be used mainly for training.  It performs best on the track or on somewhat level paved roads and bike trails.  It is not designed to use on gravel roads, uneven trails, or even really crowned roads.  Because of the carbon force plate not flexing, running on those types of surfaces could be uncomfortable on your feet and ankles so keep that in mind when you take them out for a run. 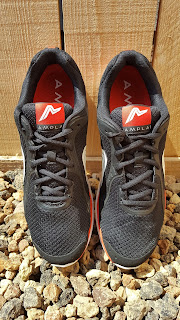 So this is actually the second pair of Ampla Flys that I have tested.  I reviewed them back in February (click here for my first review).  A fellow blogger was just as excited to try them out as I was and we happen to wear the same size shoe.  I figured I was so blown away with the Ampla Flys that I would give him my pair so he could test them out and review them on his blog.  He was so impressed, I let him have the shoes, not knowing what a valuable tool they really were.

In my initial testing earlier this year, I ran on both paved roads and at the local track.  The results were the same in both situations.  I found that my foot strike was more natural and it made me want to put more emphasis on the toe off part of my gait, which I had never really been good at.  I was able to keep a quicker cadence with less effort and my running form seemed to be easier to hold, even at the hardest parts of my workout.

So how did this translate into my pace during my initial testing?  You need to take into account that I had been training hard and had lost weight when looking at my times.  I went out to the track to do 4x1 mile intervals, which my half marathon training plan at the time was calling for.  My fastest mile to date was 7:32 min/mile.  Here are my splits for my intervals:

While I may be a little faster due to my training and weight loss.  There is no way that beating my mile PR by 47 seconds (on my last interval) and having 2 of my 4 intervals faster than my PR didn’t at least have a little to do with the Ampla Fly’s though.

Testing them again 6 months later
I received another pair to test as a BibRave Pro since I gave my first pair away.  I got the black version this time, which is extremely sharp looking.  Other than the color, they are identical shoes.  I tested the shoes on fast runs, intervals, long runs, and even took them out on the decomposed granite track near my work.  I didn’t necessarily learn anything new, but was reminded about the true benefits and purpose of the Ampla Flys.

My form gradually shifted over the past 6 months and became less efficient.  I actually didn’t notice this until I started testing the Flys again.  Almost instantly, I noticed that my running form became more efficient and that I had more energy later in my runs.  I experienced the same wear patterns as in the first pair that I tested, but since the first pair is still holding up after 6 months, I am not too concerned.

Does this shoe make you feel faster? Not necessarily.  I do feel like it takes less of an effort to go fast though.  I am able to keep my cadence up and stay in better running form longer.  While these won’t be my every day running shoe, I will use them on a regular basis to reinforce my correct running form.  It is an awesome tool to help you run as efficiently as possible, which in turn will help you run faster and farther.  After all of my testing, I agree that the Ampla Fly can help improve running mechanics, cadence, and posture.

Cons:
Not made for all types of terrain
Shoe looks like it wears quickly, but does hold up (cosmetic)
Heel slides up and down until you break in the shoe

I would be lying if I told you I wasn’t a little skeptical when I first got the Ampla Flys in the mail.  I have tried unique shoe designs in the past and most of them were terrible.  I was shocked to discover how natural and comfortable they felt.  You don’t feel like you are getting help, but my tests have shown that I was faster and more efficient not only when ran in the Flys, but the benefits transferred to my other shoes as well.  I know there are a lot of other variables like training hard, but beating my previous mile PR by 47 seconds cannot just be my training.  The Ampla Flys are the real deal.  They are worth testing out.  You can buy them from Ampla’s website for $120.  Welcome to the future of running!
Posted by Brian Goldman at 6:00 AM