I ran across the From Fat to Finish Line movie on Facebook and was really interested in finding out more about it.  I reached out to them and was given the opportunity to watch the movie before the initial release.  It has taken a while to write the review, but here it is. 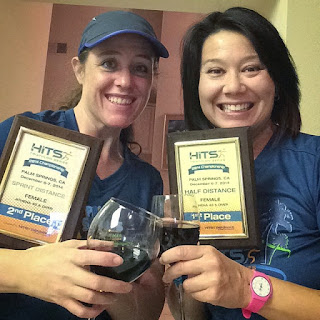 From Fat to Finish Line is a support community for, and made up by, people of all shapes and sizes.  They promote an active, healthy lifestyle and help with training for reaching your goals.  They have different forums from blog posts, to motivating stories that help to inspire and inform people whether you are just starting to lost weight or if you have lost weight and want to keep it off.  They are working on an app that will be ready for release shortly.  You can follow them on Facebook or join their free Facebook Support Group by clicking the links.

Jen Roe and Angela Lee met in 1994 when they worked for a daytime talk-show.  The two went their separate ways, but reunited in 2009 to form a production company.  They were both overweight.  Angela had been running since 1994 and inspired Jen to sign up for a half marathon after Jen saw Angela finish the Surf City Half Marathon.  Jen began to blog about her running journey and Angela was her biggest supporter.  They continued to run together and one day, Katie Foster from the blog Runs For Cookies, invited Jen to do a Ragnar Relay race along with 11 other people who had all lost significant weight.  That is how the documentary began.

From Fat to Finish Line started as a documentary film that follows those 12 people who had all lost an average of 100 pounds each.  The film documents their journey throughout the 200 mile Ragnar Relay Race.  The film was released this month and you can buy it on iTunes for $12.99.  Amazon also has it to rent for $4.99 or buy from $12.99. Here is the trailer.


What I can say is that I was extremely touched by this documentary.  I started to cry because of how inspirational the stories were and that was only 3 minutes into the film.  The race was from Miami to Key West, Florida and took over 30 hours to complete.  It was amazing to hear about the transformations of each runner, what drove them to lose the weight , and how they found a passion in running.  Here is a breakdown of each member.

Meredith – 101 lbs. lost - “Running Helped my to start living my life instead of watching life pass me by.”

Lealah – 130 lbs. lost - “Running helped me realize that I am capable of achieving whatever I choose to attempt.”

Andrea – On the Oprah Weight Loss Finale Show of The Biggest Loser in 2011 - “Running helped me lose the weight that was holding me back from becoming the me I always wanted to be.”

Ada Runner-up on Season 10 of the Biggest Loser, 100 lbs. lost - Running allowed me to be able to do the simple fin things that normal people get to do.”

Linda - 40 pounds lost - “Running has given me the chance to live a happier, healthier, disease-free life.”

Jen – 100 lbs. lost - “Running helped me discover an inner drive, determination and strength I had never known; it also gave me a sense of accomplishment that had been missing my entire life.”

Allison “Running introduced me to a healthier, happier more positive me I never knew existed.”

John “Running didn’t change me. It just helped the real me find my way out.”

Each story is inspiring and can be used to motivate you in your own journey, whether it is losing weight, starting to run, conquering a new distance, or eating healthier.  I cannot recommend this documentary enough and would love to hear your comments once you have watched it.  Please go to their Facebook or Facebook Support Group if you think that it could help you out.
Posted by Brian Goldman at 6:00 AM